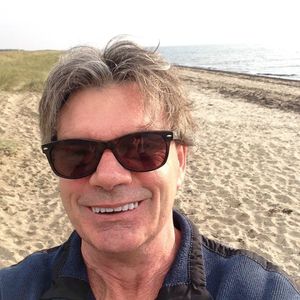 Andy Goggin is a singer and songwriter whose work has taken him across continents and into the best neighborhood pubs. Born in 1957 over a London fish ´n´ chip shop, he then grew up in the cotton mill town of Darwen between Liverpool and Manchester, England.

As a young musician, he developed his musical skills playing the working-mens clubs of Northern England. He played the same stages as musical giants including: The Hollies, The Swinging Blue Jeans, The Tremeloes, and even The Beatles. After touring Europe with several bands, he landed in Denmark during the indie rock scene of the 1980’s. From then on, that was home.

Recent projects include the recording of a new album of duets co-written with a collection of powerhouse female songwriters/vocalists. Two tracks from the project –  “Watch Out” co-written with Nanna Larsen and “My Chemical Distortion” with artist MetGry – are to be featured in the American national television series, Synchronicity. Another track, “White Knuckles”, developed while on location during a USA tour, features a partnership with Kristina Jacobson and is included on her album, Three Roses.

Andy Goggin is a seasoned and well respected songwriter. He is founder of The South East Songwriters Club and co-founder of Nyesange.dk, an annual songwriting camp developed with Annette Bjergfeldt of Denmark. He is also the founder of the La Finca International Songwriting retreat which is held just outside Malaga, Spain every year, bringing together songwriters from all over the world to collaborate and be coached by some of the top songwriters around. He has been invited to The House of Songs (Austin, TX) where he has collaborated with other prestigious songwriters. His entry, “Jesus and the Man in the Moon” is a prize winner in the international Song of the Year contest.

Andy Goggin has built a successful career around his musical talents. He has a full catalogue of original songs and a range of artists recording his work. He collaborates and co-writes with musicians from around the world, including those in the USA, Germany, Sweden, Ireland, and England. He encompases an incredible range of genres and stylistic approaches. Though his most recognizable sound is a cross between country and 60´s style British rock: a sort of ”Grand Ole Opry” , Nashville meets ”The Cavern Club”, Liverpool,  although his catalogue includes everything from pop to jazz and even dance music.